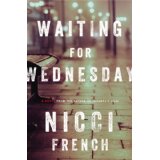 Here I am, halfway through Nicci French’s Frieda Klein mystery series—I just finished Waiting for Wednesday—and I can’t resist the need to vent. This husband-and-wife team has written some of my favorite single-title suspense books. I’ve been addicted to them since my sister brought back a copy of Beneath the Skin from a trip to England.

But…Frieda. Frieda, Frieda. Frieda Klein is an interesting anchor for a mystery series. She’s a psychiatrist who desperately needs to spend some quality time on an analyst’s couch herself. She blunders into murders, her solve rate is 120%, and she’s stalked by a serial killer the police refuse to believe is still alive. She’s also blessed with an interesting posse of friends, relatives, and love interests who are devoted to her despite the fact that Frieda rarely answers her phone or returns email messages. (More on this below.) I imagine she’s as frustrating to know as she is to read about. Yet here I am, drumming my fingers impatiently for the chance to read the upcoming Thursday’s Children.

The most frustrating thing about these books? The authors’ reliance on withholding information. This is one of 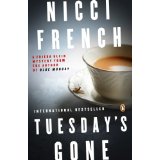 my biggest pet peeves as a reader. Whenever I read the words “I can’t explain/talk/go into that now,” I start to twitch. Unless the character truly means she can’t. For example, if she knows the murderer is listening in. Or if a flight attendant is shouting at her to turn off her cellphone. Under those circumstances, okay. But this usually isn’t the case with Frieda and company. The authors spin the plot out by having characters not respond to each other, or put off responding. Two characters will be on the phone, a great way to convey information, but they’ll put off exchanging key information until they can meet in a cafe, or at the office. By the end of Waiting for Wednesday, this was starting to give me fits. I don’t know about you, but if I were dashing off to confront a serial killer and I called my friend to let her know what I was up to, I’d go ahead and ID the killer in a message instead of telling my friend to meet me later for tea so I could give her the news.

But if I were about to rush off to confront a serial killer, I hope I’d have someone to call besides Frieda Klein, because Frieda never answers the phone.

I’m still addicted to this series. I just hope that sometime between Thursday and Sunday, Frieda gets psychological help and communications counseling.

Anyone else reading the Frieda Klein series, or another good series? What are your reading pet peeves?